“Don’t people just talk about how good their nap was? Or that they are eating ice cream?” My friend asked me… I held my tongue and sighed. Another colleague told me how in the past few weeks she had been contacted by countless (ok maybe a dozen) social media “experts” who breathlessly have told her, as a representative of a charity – she – and her charity – MUST! BE! TWITTERING! “Where have all of these ‘experts’ come from John?” She asked.

Seriously… what the hell is twitter? Who is on it? Should you or your charity be on it? Why all the mania over this ’social media’ thing – just slow down people… This boat’s not going anywhere…

Here’s my completely NON-EXPERT opinion on Twitter and social media. Do what you want with it.

It’s cool. For a number of reasons.

Cool reason #1:Within moments of twittering about something – I can watch- in real time that message spread. Last week I tweeted/twittered – whatever about how I plan on Adopting a Mom this week in honour of Mother’s Day for Rethink Breast Cancer. I also asked my ‘followers’ to RT (retweet) that message please! In the span of a few hours, I watched as my followers RT’ed my message also asking their followers to RT, which some did and so on and so on… They say most users have an average of 100 followers… My message to my community, RT to their communities, RT to their communites and so on and so on… in real time. Rapid fire spreading of information. Where else is this possible?

Cool reason #2: Building a community of people who share interests with you is nothing new – but Twitter let’s all of those people stay in touch with others easily and also quickly allows you to find others who share your interests.

Cool reason #3: It’s not Facebook (too social) and it’s not LinkedIn (too network-y) – it’s both! The people who are using it best find that common ground between “this is me personally and professionally”. People like to talk to people. That’s my way of saying – you can’t be “CHARITYX”… we deal with enough faceless entities in our lives.

Cool reason #4: It’s a new channel to reach a new audience. As I mentioned to a client the other week – it’s not enough anymore to only be on the web, or to only do direct mail… especially if you are a charity. You need to reach people in ways that are comfortable for them – and your donors are tweeting, they are facebooking, they are surfing, they are giving money over the phone, through the mail and face to face…

Twitter or social media is nothing to be afraid of. I think a reason so many get terrified of it is that it is “one more thing” they have to learn and do – and that’s true. But like any tool, once you learn how to use it – you see it’s usefulness and potential. The other thing you need to remember is, as I mentioned above, this is not the place to be CharityX. Be you.

I think that social media belongs to the charities who are smaller and have the flexibility to move in time with their donors.But having said that – you can read below how War Child is using it effectively…

The days of creating a expensive website that sits there and does nothing – are over folks.

Before I go, I asked Lindsey Patten if I could republish part of her blog recently where she discussed social media with Dr. Samantha Nutt from War Child. Be sure to check out the rest of Lindsey’s great blog right here. Thanks Lindsey!

There are many nonprofit organizations on Twitter and many are using Twitter in a variety of different ways. One of the best organizations I’ve seen use Twitter is War Child. War Child is a great organization that provides assistance to war stricken children all over the world.

Recently the Executive Director, Dr. Samantha Nutt traveled to Darfur and twittered the whole way there. Some tweets are amusing, others alarming and even more so are downright scary. She not only told stories of her surroundings but of the people that she met. 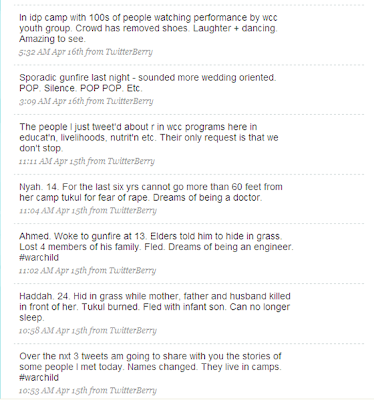 Each of the above connects with you in a different way. I’ve never donated to War Child but now I find myself intrigued. And that indicates a job well done. A connection has been made and that is ultimately what social media strives to do.

I had the opportunity to interview Dr. Samantha Nutt about War Child’s use of Twitter as well as her recent trip.
1. Why did you choose to Tweet about your experience?
We wanted to give people a more direct connection with our programs and the experiences of the people we work with. It was an experiment, really. There was no guarantee that the technology would work. When I touched down in Darfur and checked my blackberry I couldn’t believe I could still access Twitter. In fact, the only place it didn’t work on the whole trip was Beirut airport on the way home! Twitter was one way though ­ I could send but I couldn’t see what response it was getting, which was frustrating. That’s why we’re doing a Live Chat next week to give people a chance to have some of their questions answered.
2. Has War Child had success garnering donations from Twitter or do you use it primarily for awareness?
We have received around $8000 in donations through Twitter initiatives since January. But we don’t use it as a place to ask directly for money. It is a place to build relationships and through that a network of friends who will act, to some extent, as ambassadors for our work. Engaging with people on social media platforms – and especially Twitter ­ humanizes the organization.

3. For those who perhaps did not follow your tweets, explain a bit more what your experience was like in Darfur and why you were there.
It is always a compelling experience to touch down in a war zone. The extent of the trauma and the suffering is staggering, but I am always astounded by people’s resilience and determination. You expect to meet people who have given up. Instead, you meet people who remind you every single day why we get up and do what we do at War Child.

4. Some of the Tweets seemed to indicate that you were very close to danger. How much of that was a concern for you?
Security is always a major concern in many of the countries in which we operate. You must be aware of the dangers and the risks. Sometimes that can be quite intimidating and almost paralyzing – you are always looking over your shoulder, always wondering what will be around the next corner – but it is better to have an acute awareness of the insecurity and take precautions than to be caught unaware. I was more concerned about my security on this particular assessment mission than I have been for a very long time. It reminded me of the experience of working in Somalia in the mid 90s. But security is a huge problem for Sudanese nationals as well. Anyone who is perceived to have either an income or access to valuables (e.g. a vehicle, a sat phone) is at risk.

5. What does War Child hope to gain from Twittering about events/trips like these?
It’s not so much what we can gain but what value this type of first hand reporting brings to our network of supporters. The feedback I received suggests that people found it engaging and an eye opener and the increase in people following the journey means it must have been having some kind of positive effect! I think the fact that I could talk to a woman who has seen her family killed in front of her and 30 seconds later post her story, gave the people following it a much more visceral and immediate experience than they would have had reading a news report, for example. There is also something to be said for posting what you are experiencing it as you experience it. It’s raw; unfiltered. Sometimes when you have a chance to think about it for a while you end up over-rationalizing or over-interpreting the experience and it loses some of its authenticity.
The success of this, in retrospect, was in its honesty and simplicity – there was neither the time, nor the space (at under 140 characters) to be lofty about any of it.

You may think your cause not as compelling as Darfur, but if you share your client stories in a interesting and engaging way, people will respond. Twitter is one way to do that. Remember that people give to people, not organizations or websites.

Agent John is a long time marketer, designer and ranter. Agent Jen calls him "authentic". Others may not be so kind. The truth is, John wears his heart on his sleeve and when provoked will wave his hands and raise his voice an octave as he voices his frustration and opinions. And a blog post may even come of it.

TOP 10 list of design mistakes I see in direct response over and over again
September 9, 2019